She asked what I thought about “harem” pants.  She had seen them named as a trend in a style blog she reads and immediately felt “sick to [her] stomach.”

No, it wasn’t the baggy crotch or visions of MC Hammer dancing in her head that gave her the heeby-jeebies.  These ladies sporting various street style takes on the pants in question look lovely, yes? 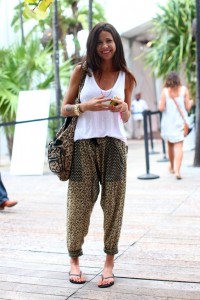 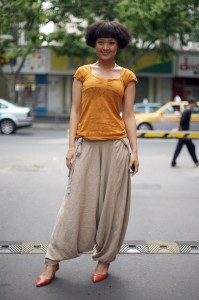 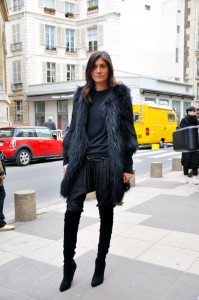 Source ; source. Even Emanuelle Alt got in on the trend – source.

Her concern was simply this: “harem” refers to the woman-only space in Turkish and Arabic cultures where the wives of a polygynous family were secluded away from men.  And as Ginna so aptly puts it:

I don’t want to dress like a member of someone’s harem, or even wear something that alludes to that! Who thinks up the names for clothing that allude to women’s imprisonment / sex slavery, etc?  Why do ‘harem pants’ sound so glamorous, then gross after you think about the significance?

It should be noted that a fair amount of exoticizing goes into Western perceptions of the harem as a space of female disempowerment.  See Reina Lewis’ Rethinking Orientalism as a source for how Ottoman women within the harem wrote about it as a target for reform, but also as a space where women held their own and, at least in the upper classes, were often just as educated, refined, and modern as their Western counterparts. (British women, among the most frequent Western visitors to such harems, were, if married, still legally subordinate to their husbands until 1870 or 1882, the height of harem culture).

But even as harem inhabitants protested sexualized, demeaning Western depictions of themselves, they also worked to change the system so that women had more autonomy and access to the public sphere. So although harem members weren’t necessarily sex slaves any more than the British wives visiting their confines were, “harem” has continued to carry the connotation of female autonomy significantly limited by a patriarchal system.

(Just typing that makes me think about reproductive rights issues in my 2016 American context….ahem.)

On the other hand, as Ginna points out, such baggy pants themselves aren’t inherently sexualized; depending on your culture and era, they might just read as the opposite of objectifying a woman’s body.

And it’d be a shame to avoid a specific item of clothing just because someone named it something offensive—doesn’t it give the namer more power than the wearer over what she uses to clothe her own body?

But wait! It gets even MORE interesting.

According to Wikipedia, that fount of knowledge (and yes, all these references have legitimate citations…), “In 1911 the Paris couturier Paul Poiret introduced harem pants as part of his efforts to reinvent and ‘liberate’ Western female fashion.[4][5]”

Remember this episode of Downton Abbey, where rebel aristocrat Sybil wore “harem” pants to dinner as part of her nascent awakening to women’s rights?  The expression on Carson’s face says it all:

At the time, pants like this were seen as sexually deviant and thus expressive of a woman’s desire to reject traditional mores.  Can’t get much more politically subversive than that!

University of Sydney professor Adam Geczy suggests that “harem pants, as a direct cultural appropriation, represent the point at which Western fashion began seriously challenging traditional cultural claims to their own styles.[6]”

So now it’s even further complicated—these pants represent, at the same time, Orientalist fantasies of Middle Eastern women; the sartorial choices of those women themselves; Western women’s liberation; and the origins of fashion as a tool for cultural appropriation.

Yikes.  Should we just call them Hammer Pants and move on?

(Unless M.C. Hammer’s stage name is a violent sexual innuendo I was too young and innocent to understand…)

So can I wear “harem” pants?  (By now I assume you’ve realized the “Can I Wear…” bit is a rhetorical device meant to generate discussion—since I, and you, can obviously wear whatever we damn well please.)

Well, I already own a couple pairs from a stay in India where they were part of the modest dress it was safer and respectful to wear in some of the more conservative places we visited. (That’s yet another layer of complicatedness—I think we’re up to 5 now.) 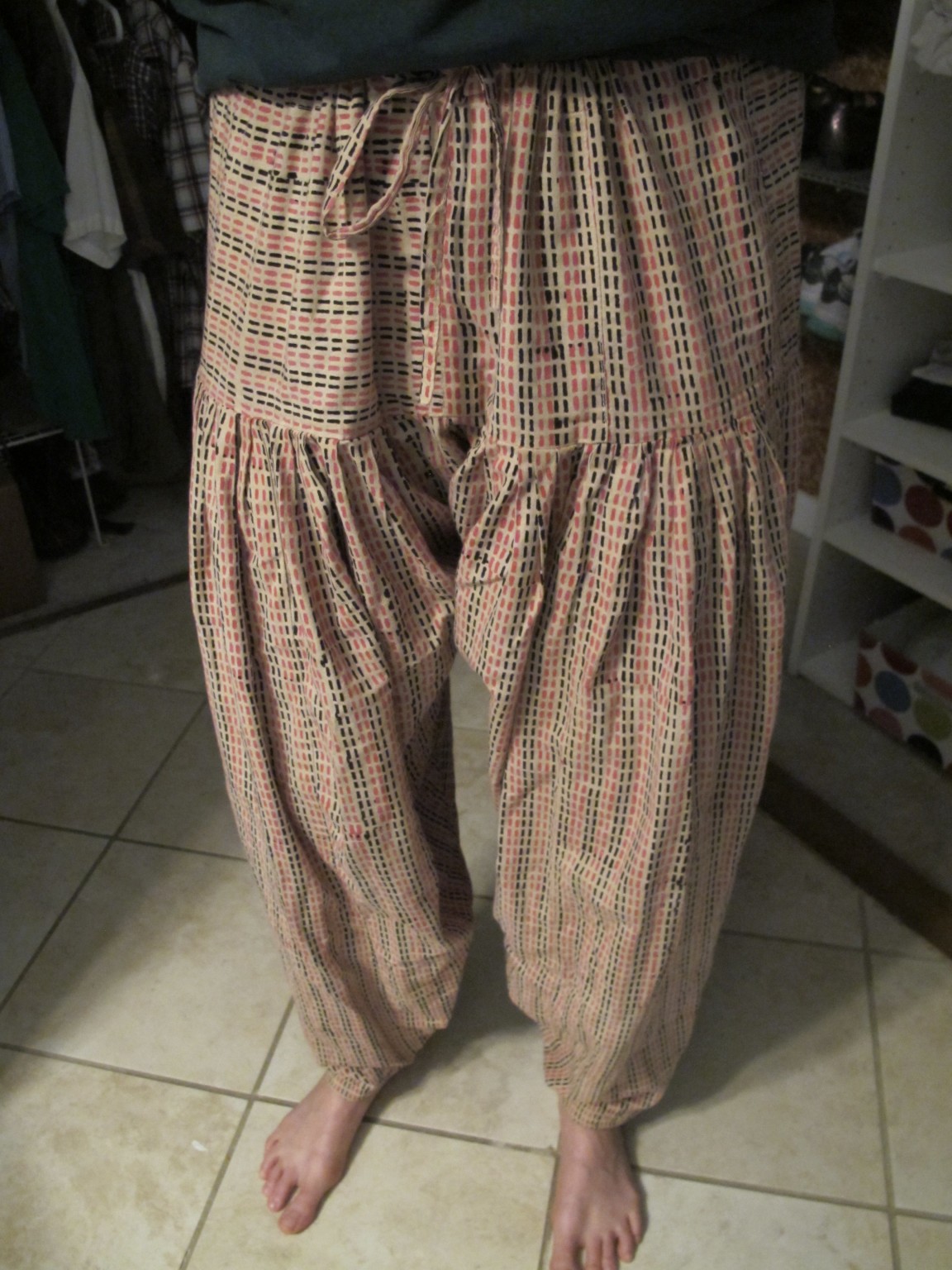 As my friend and guide Stephanie pointed out at the time, wearing the bottom part of salwar kameez (the South Asian name for the suit that features pants with lowered crotch, baggy legs, and narrowed ankle) without an appropriately long kurta on top is like wearing your underwear in public.

So now I’ve just posted a picture of myself in my underwear on the world wide web.

But seriously, I do wear them like comfy pajama pants (as above) and, if I were to travel back to India, I’d wear them there, too, in the same context and for the same reasons I mentioned above.  And if I dug the “Westernized” version of these pants, I wouldn’t hesitate to wear them on the basis of their name. I would simply refer to them by some other name:

As to the symbolism of these pants…what’s y’all’s take?  Is the current styling far enough removed from original Western wearers’ Orientalized sexual fantasies to make it a non-issue?  Or could avoiding this style be a way to take a stand against cultural appropriation in general?  Or, could they serve as a proud tip of the hat to the burgeoning women’s liberation movement of the early 20th century?  (Ha, see what I did there? ‘Cause the pants, they kind of burgeon out…nevermind.)

Would you wear şalvar/Hammer pants/jupe-culotte from a stylistic perspective?  What about from an ethics perspective?  And what would YOU call them?

And if you do decide to go for this trend, find a way to source it ethically or buy it secondhand.  Note to self: scour racks for said pants next time I’m at the thrift store since the current iteration has been around since at least 2010, more than long enough to make it through the donation cycle.  (I bought mine at the Tilonia Social Collective’s textile shop, but you have to purchase in person, so unless you’re traveling to Rajasthan in the near future you’re out of luck.)

Thanks, Ginna, for such a generative question!  Email me with your questions at Leah at ThriftshopChic dot com or ask a question in the comments below.

10 thoughts on “Can I Wear Harem Pants? Or, Thoughts on Orientalism, Feminist Liberation, and M.C. Hammer”