Yesterday I started my Closet Rehab: Summer Edition, aka I Don’t Have a Perfect Wardrobe.  I began with tops: tops that didn’t make the cut, tops that were “Stars of the Summer,” and some that weren’t absolute faves but were worn regularly and without frustration.

The description of that last category, you may have noticed, does not particularly resound with enthusiasm. They were clothes that worked, but not rocked.  And if you’re trying to get to a wardrobe of clothes you love to wear, “not frustrating” is a little underwhelming, no?

You’ve probably been there before: you’ve done a closet cleanout and been pretty ruthless in saying goodbye to clothes that weren’t making you happy…only to find yourself a week later pulling on a shirt or pants you kept but didn’t love, rationalizing that they’re practical, or too cute or original to give away, or that other people like them on you.

That was me yesterday morning, as I donned my navy and white ruffled sailor shirt, already suspicious that I might have kept it for the wrong reasons. As I thought about the number of “hearts” it got on Instagram, or the number of compliments I’d received when wearing it, or how its ruffles added visual variety to my navy-heavy wardrobe and played well with a pair of pants, a skirt, and shorts I own, I realized that I was thinking my way into keeping the shirt instead of feeling my way into keeping it.

The truth is, I like the shirt but I don’t love it.  It’s cut a little funny at the bottom and its fabric is just about starting to pill and collects little pieces of lint and detritus.  I love the ruffles, true–but they don’t really feel like “me.”  It’s like the coral top that just felt “meh,” no matter how good it seemed on paper.

This shirt was originally up on the wall to be cut, and then at the last minute I decided to give it one final run (yesterday’s wearing) to decide–because maybe I just hadn’t given something different enough of a chance?  But my initial intuition was right, and all the reasons I fought to keep it were based in fear.  You know:

Fear of what others will think: “That was so cute, why did s/he get rid of it?”

Fear of missing out: “What if this trend or new-to-me style is really great and I just haven’t given myself enough time to warm up to it?”

Fear of not having enough: “This goes with everything…if I get rid of this, I won’t have anything to wear.”

Fear of not being enough: “My style should be more girly…more professional…more edgy.  This makes me look more like who I think I should be.”

Friends, none of those fears should hold you back.  A wardrobe is, in some ways, a superficial–literally and figuratively–place to talk about liberating yourself from preconceived notions, yours or others’.  But clothing can also be a very powerful visual expression of identity, particularly for people whose style doesn’t fit within mainstream sartorial conceptions.  Whether you’re doing a closet cleanout at the end of a season or embracing your deepest inner truth via the way you dress, it can feel exhilarating to step into who you are in a tangible way.  Even if it’s just by giving up a shirt weighed down by “shoulds.”
So goodbye, sweet shirt.  It’s been fun–now go make someone else happy! 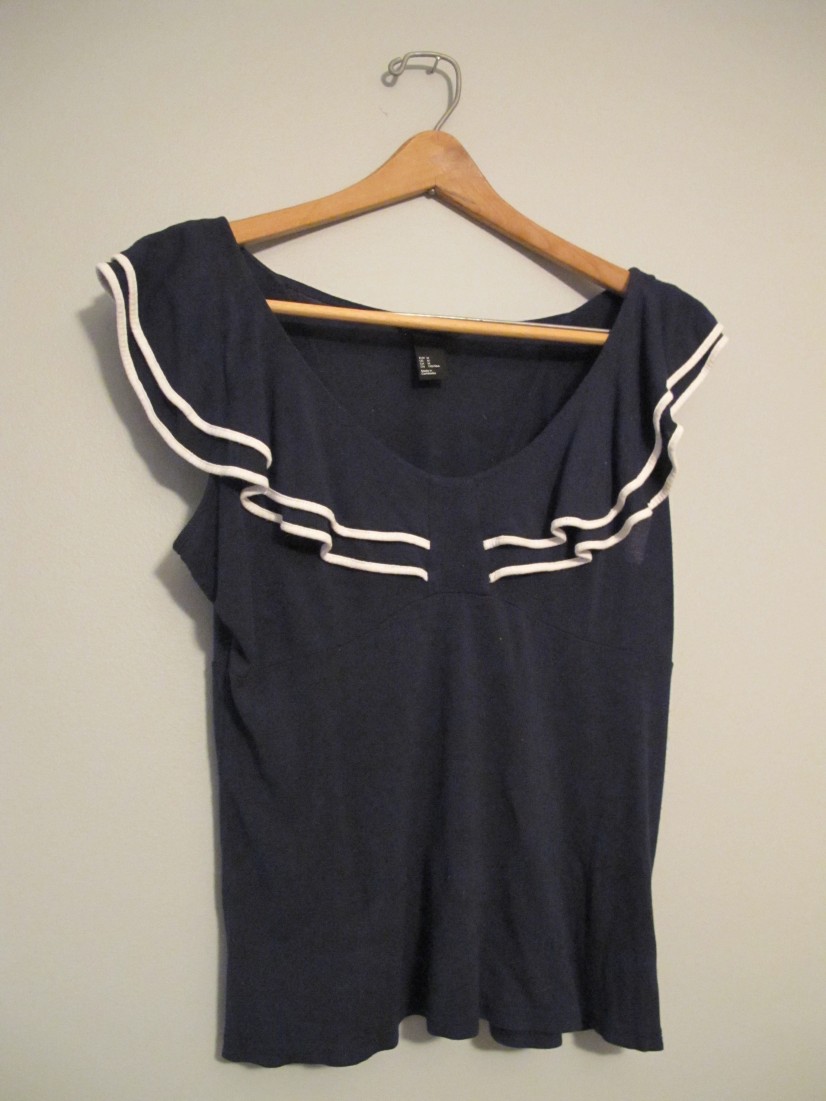 What clothing items have you held onto when you didn’t love them?  Was fear behind it, or something else?  Scroll down to join the conversation!