I began thrifting probably in late junior high or early high school…the exact chronological origins are shrouded in a foggy mystique.   But I remember oh-so-clearly the twin geographical Edens, if you will, where my passion saw its genesis: Millie’s Treasure Chest and St. Vincent DePaul’s, both tucked away on the unassuming main streets of the tiny rural towns where my grandparents lived.

I don’t remember which shop I discovered first, but I do remember my sense of cosmic wonder at realizing that both hamlets I visited yearly each had a little storefront full of secondhand gems, the stock of which would be somewhat renewed by the time I came back to town.

Millie’s was run by an elderly woman named–you guessed it–Millie’s.  The doorbell would ring as you came over the threshold, calling her from the back of the usually empty store to greet me and ask (again) to whom I was related.  Once she had placed me she would nod knowingly, ask after my mom and grandma, then invite me back to come say hello to her wheelchair-bound husband who also knew my family.  Most days he sat cozied up in the back room next to a radio whose murmur you could hear through the makeshift curtain strung across the tiny fitting room for privacy.  It was a feat in that little room to contort myself, whilst trying on an item of clothing, without banging my elbow or exposing myself to the one other patron in the store (who inevitably seemed to be browsing within direct sight of my tortured machinations).  Depending on the day and her husband’s health, Millie might not open the shop, so it paid to telephone in on the local exchange to ensure she was open before we made the trip to town.  Just remember to let it ring long enough for Millie to make it up front to answer…

I vividly remember the vintage (back then it was just “old”) Snoopy & Woodstock shirt I found at Millie’s and wore with loving pride–something like this (although I don’t think there was beer involved): 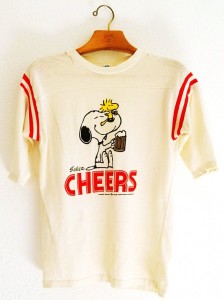 …as well as the baseball tee from the local highschool where my mom had attended, which seemed so cool to wear back home.  And then there was the embarrassing time I came home with loot from Millie’s only to find that I’d bought some shirts my cousins had thought were uncool enough to donate.  Suffice it to say the bar was set pretty low, pretty early on, concerning my ability to be shamed by ridiculous thrift purchases.  St. Vincent de Paul, in my other grandparents’ town, held out the promise of books more than clothing, which I happily devoured; I also usually managed to find some good t-shirts and a knicknack or two to cart home.

Despite multiple visits to Millie’s and St. Vincent de Paul (my dad wanting to know if I’d finally met Vincent…or Paul), I didn’t even realize that thrift stores were a widespread phenomenon until a much cooler band nerd at home revealed to me the existence of a local Salvation Army store.  I was not terribly impressed, finding their wares to be rather odorous and not terribly clean compared to my old standbys–but mostly I was overwhelmed by the sheer volume of clothes.  (A precursorial–is that a word?–sign, I think, that I would later prefer the scale of one thrift store to the vast retail offerings of the internet or big box stores.)  Also, I didn’t really know what to do with this new class of thrifted finds.  A baseball tee with a familiar logo and a shirt pre-owned by my cousin seemed logical enough for me to own–but a tweed floor-length coat that smelled of mothballs (my approximate memory of what my friend bought)?  I already owned a winter coat and I didn’t yet have the sartorial guts to pull off something with such character.

Thank goodness my friend let me in on the secret that thrift stores were a “thing,” though, and that one could plausibly find real-life clothes there to render one’s style fun and unique.  Although it would be awhile before I began thrifting locally or regularly, I was more than happy to pick up vintage fedoras, Mardi Gras masks, and cowboy boots on my travels–I even spent part of a day in Hawai’i scouring a local secondhand shop for finds instead of sightseeing (and I treasured the shirt I found commemorating the wrongfully dethroned Queen Liliuokalani for years).   From Biloxi to Hilo, it seemed like an original way to claim a connection with a place that mattered to me.

In college I made several visits to the Garment District in Boston and shopped secondhand the year I lived abroad; once out on my own and living on volunteer and Americorps stipends, thrifting (and going through my boss’s daughters’ donated clothing before they went out the door) became the only financially sound way to get new clothes.  I also started giving the clothes I was no longer excited about to friends or donating them to the stores where I shopped. 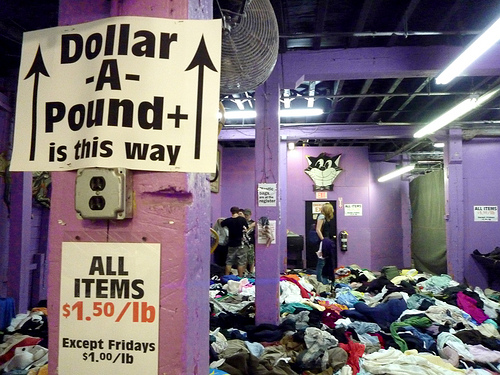 The Garment District: not for the faint of heart

Fast forward several years: my husband knows that, whether at home or traveling, if we spot a thrift shop on the side of the road and it’s open, we’re going to stop.  I now buy almost everything I wear, including jewelry and sunglasses, at thrift stores.  Looking back, there wasn’t a moment where I decided to go all-in; it just gradually grew from the financially feasible thing to do into the ethically responsible thing to do as I learned more about sweatshop labor and the environmental costs of fast fashion.  And as I thrifted more, I also learned strategies that would make it practical to clothe myself almost entirely in thrift finds.

Before long I noticed that friends with whom I’d thrift were complaining good-naturedly that I could always find “good stuff” (aka things they wouldn’t be embarrassed to wear) while they seemed to strike out.  I knew it couldn’t just be that the Thrift Gods had designated me as their favored mortal to shower with grandpa cardigans and fantastical muumuus (okay, so those things probably didn’t fall into the category of what my friends wouldn’t be embarrassed to wear, but I saw them as the real prize for committing to the thrift).  Eventually a friend asked me to take her thrifting expressly in order to explain my approach, with the hope that she might glean wisdom from my years of secondhand wanderings.  Thus was born the idea that I might have something to share, and not long afterwards this website was created to share what humble knowledge–and what definite enjoyment!–I have re: thrifting.

SO that’s the way this whole thing got started.  When did you fall in love with the thrift?  And where are you along that journey?