In the comments section of my reader survey, someone asked me to write about this:

“Your evolving style as a preacher AND fashion lover. I’ve always loved clothes but I went through a very conservative ‘modesty’ phase back in the 90’s (think covered up shapeless, long denim dresses) and looked frumpy most of the time. Even my husband didn’t like it. Ugh, what can I say but that I felt convicted at the time. It took many years before I was able to dress myself with freedom. I’m curious about your personal experience :) ”

I love this topic – thanks for asking about something I wouldn’t have thought of writing about on my own!

Let’s start with a story:

One memorable attempt at dressing to preach involved a navy shift dress in something silk-like with half-rolled short sleeves and stripes of color along the bottom – pink, orange, red, green, and white, maybe? – in varying widths.  I felt desperately chic in it, especially since it was a thrift score and thus proved one could dress stylishly secondhand.  I was so enamored of it that I refused to recognize (despite my mom’s warning) that it was too short and wore it to my home church to guest preach. 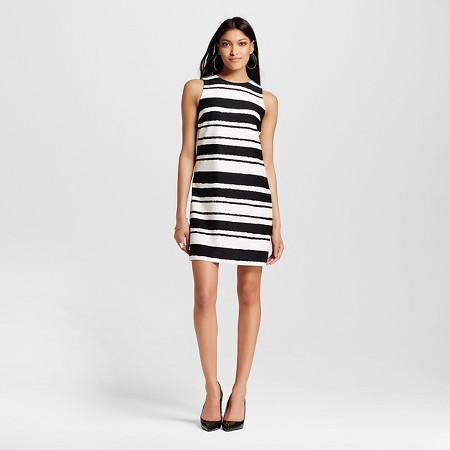 This gives you the general feel.  Source

My high school French teacher and mentor – Madame, we call her – came to hear me preach, and as folks gathered for worship, I greeted her in the pew before turning around and bending over the next pew to kiss the cheek of one of the elderly church ladies who have loved on me since I was a toddler.  A perilous move, turns out.

Madame shrieked my name (at a moderate volume) and when I turned around, the look on her face was one of complete mortification; though this happened several years ago, I can recall exactly how high her eyebrows shot up.  “Leah, that dress is REALLY short!” she exclaimed. I still wonder exactly how much she saw, but I have never had the guts to inquire.

By then it was too late to do anything about it – the prelude was starting and I was leading most of the service and in any case I didn’t just happen to have a backup dress hanging up in the narthex.  Calling to mind the lesson imparted by another mentor who once chided me for failing to network at an advocacy event because I had felt self-consciously underdressed, wearing flip flops and a billowy summer skirt in a crowd of suits, I took a deep breath and went for it.

But why was this such a problem, you might be thinking, since preaching doesn’t involve turning around and bending over backwards in front of the congregation? (Now THAT’S a visual.)  Well, friends, you have not thought through the logistics of giving a children’s sermon while sitting on the chancel floor in the shortest shift known to humanity and trying to angle your sidesaddled knees such that your confirmation sponsor, jr. high social studies teacher, mother, and the parents of the kids you babysat for years don’t see your underwear, all while wrangling preschoolers who don’t really want to sit still while you tell a story.  Let’s just say I have a lot of sympathy for Lindsay Lohan and anyone else who’s accidentally flashed the paps.

Although I have a mad amount of respect for people who dress in a way that expresses their faith, dress has never been a way I’ve expressed my own faith. (This directly correlates to my liberal Christian upbringing and current progressive Christian faith.)   In grad school, when a classmate took on a nine month modesty project – head covered, shoulders covered, knees covered, no makeup, no pants – to see how it affected her sense of self and her relationship with God, I felt no impulse to experiment with the same. 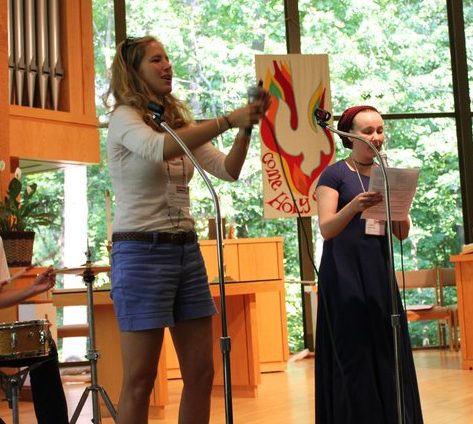 Me, dressed in shorts to lead worship next to Lauren doing her modesty thing at the time.

Neither has dress ever been a way that spiritual authority figures in my life have tried to moralize or shame me, which does often happen with clothing choices (particularly for girls and women).  For that I am profoundly grateful – in my book shame and religion shouldn’t mix.

That being said, I did grow up with parents who had some ideas about what constituted appropriate church clothes – particularly a mom who was not happy with anything too tight, too short, or too midriff baring.  I chafed against this (literally?) in junior high and high school, but a few years into adulthood I sort of naturally grew out of spaghetti straps and skintight glitter pants, and the memory of my mom’s chastisement softened into helpful parameters: if something pulls, it’s too tight; if something rides up all the time, it’s too short, etc. etc.

As the story above illustrates, though, I didn’t grow out of more “risqué” (my mom’s word) dressing all at once. As I began to dress less casually in my work life, the too-short-shift experience helped redraw the line for me about clothes for leading worship as well.  If it’s cute/trendy/chic but makes me feel distracted from or self-conscious about the task at hand, I’ll save it for the dance floor, not the pulpit.  If it passes the get-on-the-floor-and-play-with-kids test (dress/skirt hems) along with the raise-your-hands-high-to-give-the-benediction test (that one’s for midriffs) and the crouch-down-to-rescue-the-fallen-hymnal test (visible crack for pants), we’re good.

As for level of formality?  I have seen so many people shunned for what they wore (or failed to wear) to worship that I would rather dress down to help people feel welcome than impose rules on what is respectful enough for a house of faith.  I was raised in a wear-your-best-to-church environment, but I’ve also pastored an informal church start and a homeless community, so I learned a long time ago that you can worship God no matter how formal, groomed, or skin-showing you are. 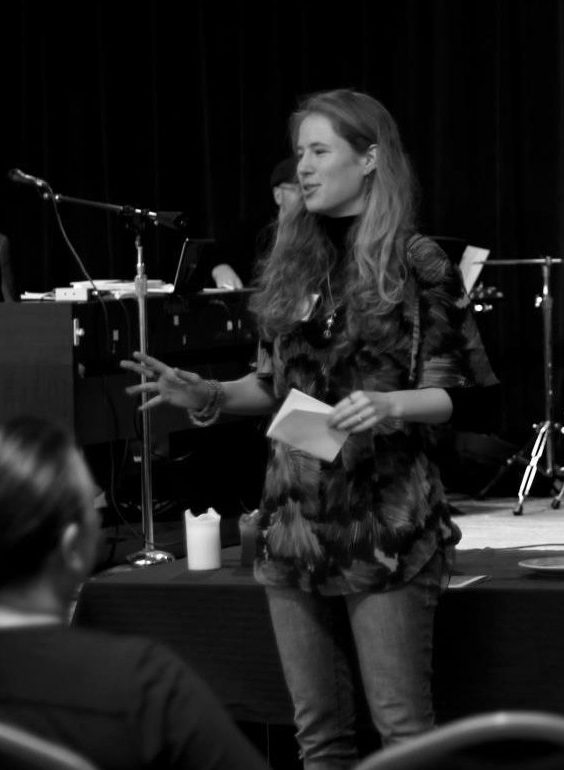 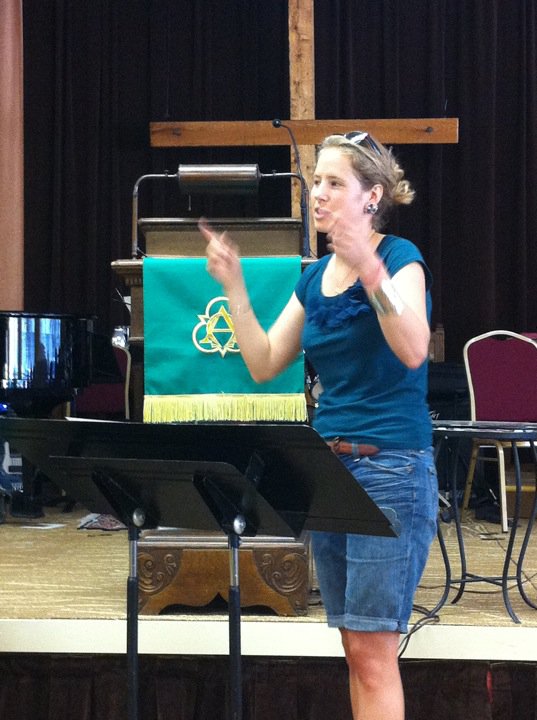 I figure God doesn’t really care, but on the flip side, I understand that people do.  A lot of folks were raised to believe that the way you dress for worship shows respect for God. That’s why, practically speaking, I wear a) what makes me feel comfortable and b) what shows general respect for my parishioners’ sensibilities but c) nothing too fancy so as not to make less formally dressed people feel uncomfortable.  (This is also why I breastfed in church but often in the back pew.  I assume not everyone is comfortable with nursing in public.)

Reflecting the surroundings, I started off like this in my current church: 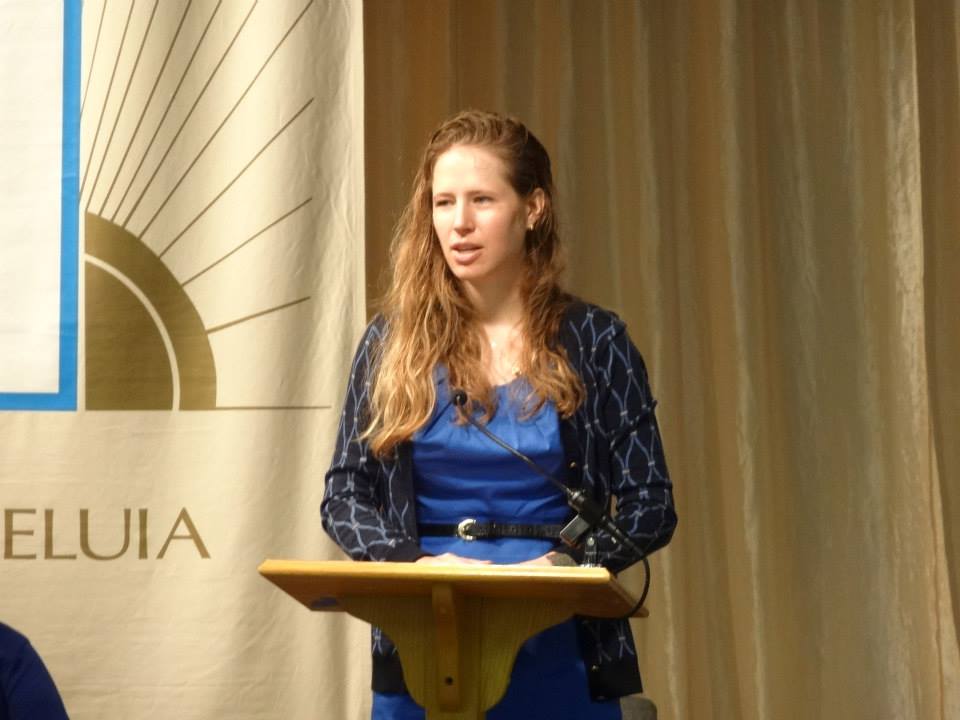 Until I realized that all the other women in the congregation, save one, wore pants: 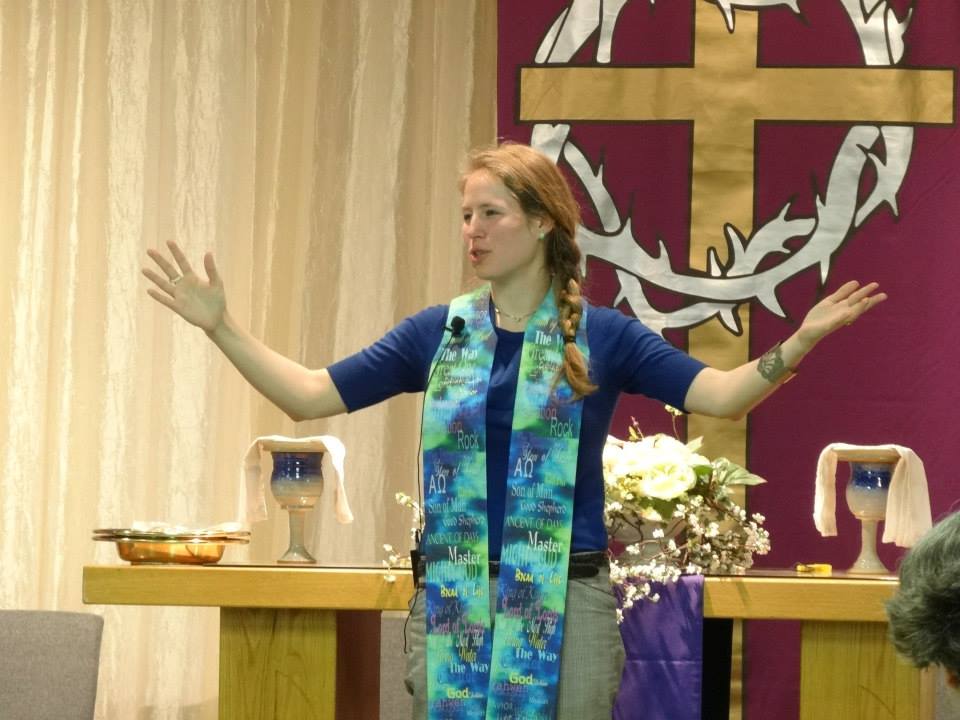 Then we moved to a less formal space: 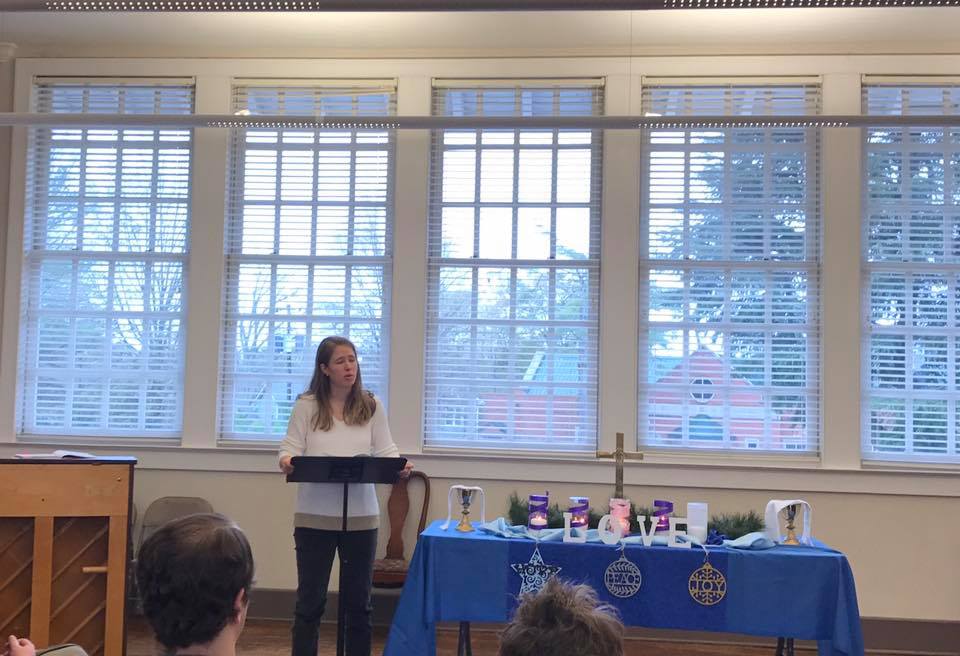 +100 points for that mid-sentence facial expression.

On a related tangent, I don’t feel any compulsion to dress a certain way at other events because I am a pastor – if I’m going to work out, or go dancing, or go to the beach, I’ll don what I personally feel comfortable wearing in those situations (which, admittedly, is really not that edgy to begin with).  My spouse once wondered whether we should buy alcohol at a liquor store further from home so we wouldn’t run into our neighbors or seminary classmates – nope.  I’m invested in reminding church members and the world at large that clergy are people, first and foremost – called to a specific ministry, yes, but not necessarily any more pious than anyone else.  And most definitely allowed to express themselves through clothing!

For weddings/ordinations/formal worship services I add the oatmeal-colored robe, cincture (rope around the waist) and a stole: 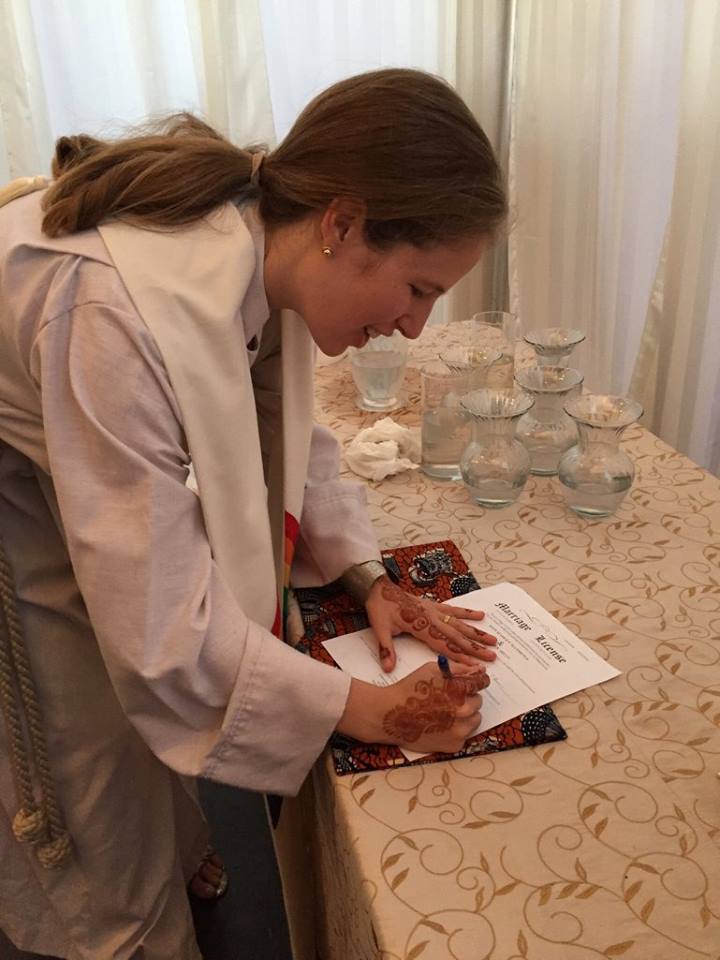 Or if I’m marching in the rain, here is the super-chic water-repellent outfit I wear (same stole as above, better view):

What have been your experiences with spirituality and dress, modest clothing, or shaming around clothes?  If you grew up in a faith tradition or currently participate in one, what are your thoughts on what’s appropriate to wear to worship?  There are such a wide array of opinions and experiences out there – I’d love to hear yours!