This post accidentally published yesterday; if you saw it yesterday, please enjoy the same text but with photos!

My thrifting list got something crossed off it recently when I found a replacement for my too-short winter white turtleneck.

I’d been looking for a few months (thrifting in the off-season to give myself time to find juuuuust the right piece) and ended up finding the perfect cream turtleneck(s) by Coldwater Creek.  The fit is not too tight (and also not too big – Coldwater Creek runs large), the length will prevent chilly skin exposure, and this shade of white will warm me up instead of washing me out: 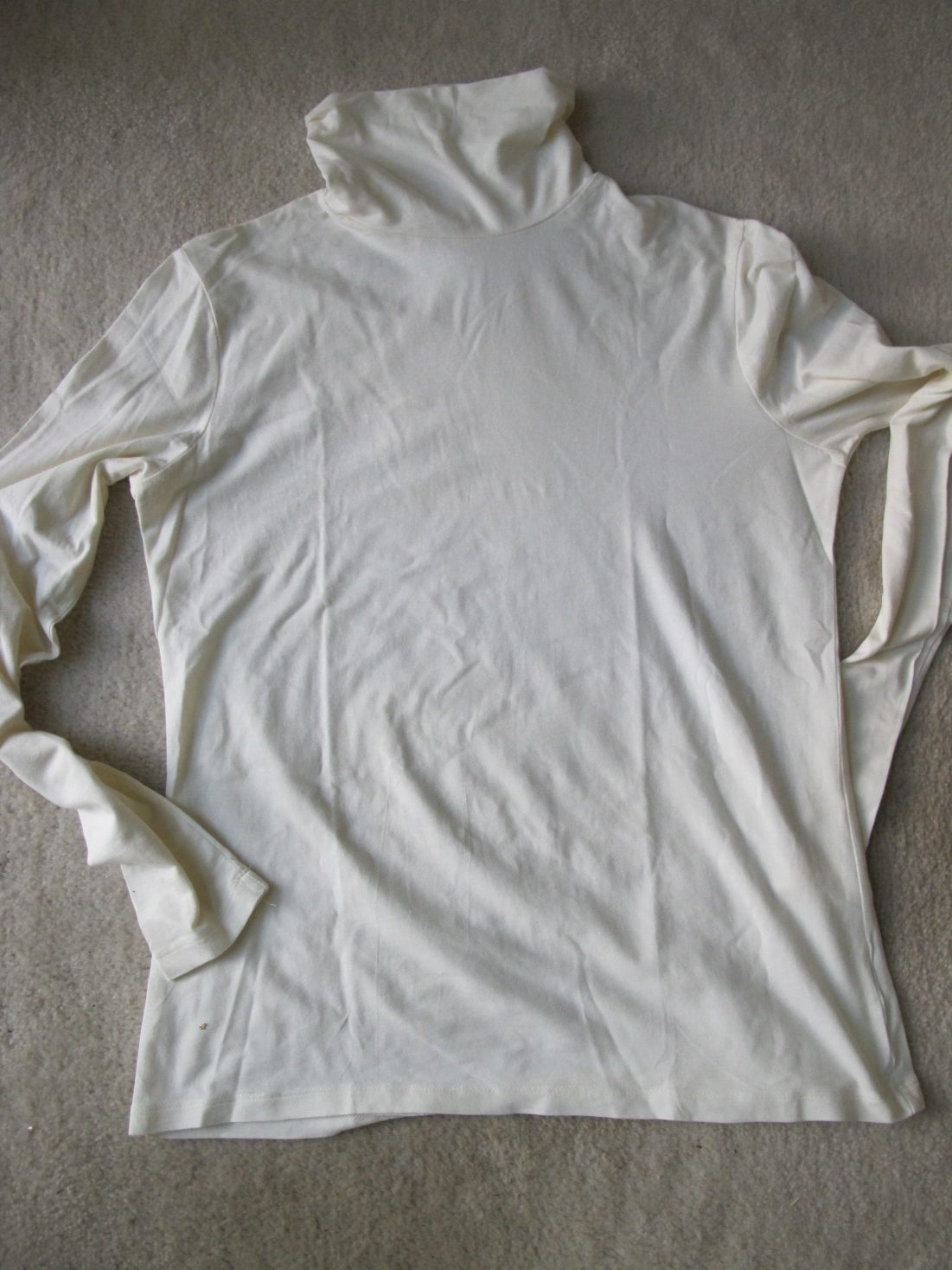 The fold lines were still in these babies, so I figured maybe Coldwater Creek had ended up with some leftover stock which they donated to Goodwill.  (I’ve seen this often at Goodwills in Florida and New Hampshire; not as common in Georgia.)

But there were no tags…so maybe someone was really neurotic and bought 4 to stock up and then NEVER. USED. THEM.

Which brings me to my dilemma: to stock up, or not?

I mean, 4 practically brand new tops in a style and color I love and know I will use, at a fraction of their original price.  Tempting.

Having multiples of a staple item means less wear on each individual garment, and it means you always have backups if one gets lost/torn/shrunk/stained.  (Hello child who loves to eat frozen berries and then wipe that cute little face on me.)

But how many backups do you really need?

How many resources do they tie up?  (Not as many if you’re thrifting, but still about $24 for the 4 of these.)

How many other people could use these if I left some on the racks?

And how much do backups promote a fear- or scarcity-based outlook on life?

This last question makes me think of a few illustrations from Marie Kondo‘s book The Life-Changing Magic of Tidying Up: the woman who hoarded 20,000 Q-tips just in case, or the man who stockpiled 60 toothbrushes because they were a good deal.

We’re guilty of this last one, though thankfully on a smaller scale.  Costco toothbrush 10-packs, anyone?  The cost-per-toothbrush was cheap and it’s annoying to find yourself without a toothbrush because your toddler is always carrying them off somewhere…but really, getting a toothbrush from the dentist every 6 months suffices.  (Plus just 1-2 extra per year if we’re sticking with the ADA guidelines.)  Or a miswak stick.

Because what happens when we stock up based on good deals and scarcity is we end up with a toothbrush holder that looks like this: 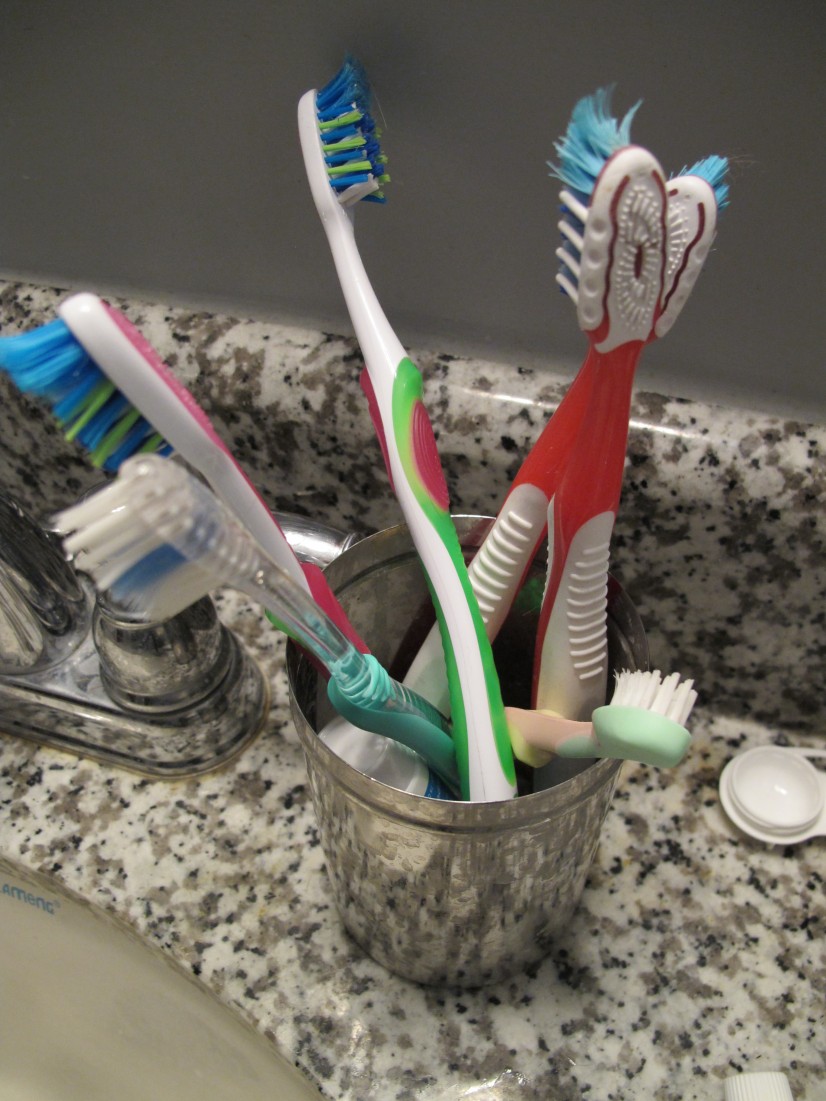 And we’re STILL using old, busted toothbrushes, in part because it’s much harder to keep track of all those extras and whether they’re in a usable state.  (I recently evacuated half the sock population from the spouse’s drawer for the same reason – JUST. TOO. MANY to keep clean/folded/sorted/screened for holes.)

Look, it’s not pathological to have one backup of a frequently-used item; it’s practical. But what if you had that one backup for every item in your closet?  You’d own DOUBLE the clothes.

You got room in your closet for that?  I sure don’t.

Too many backups also limits your creativity.  I’ve seen doubles and triples of this staple summer shirt in the thrift stores but I refrain from buying, because even though I love that top, there will come a time when I’m ready for something fresh.  If, when that shirt dies, I have two or three more just like it waiting in the wings, the sunk cost will discourage me from evaluating whether it’s still “me” and what else might fit into that slot instead.

And fear not – with mass production these days and, therefore, mass donation, it’s easier than you might assume to find an exact replacement when something you’re not ready to let go bites the dust.  You may even have better luck than with retail, where specific styles are often produced for just one season, then discontinued.

So how many of the four turtlenecks did I end up buying? 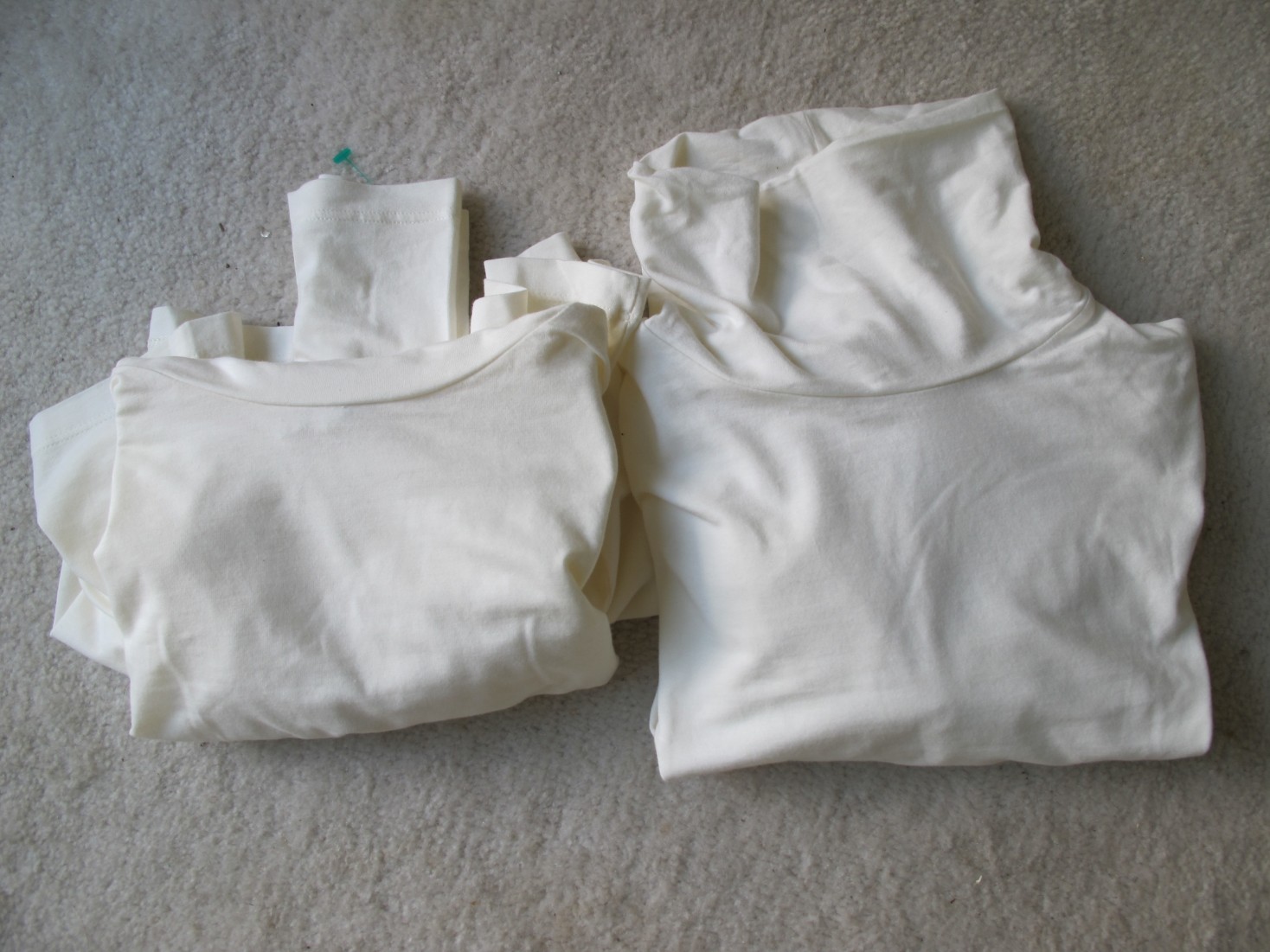 I told myself it’s suuuuuch a neutral staple that I’ll never fall out of love with it…but after my proposal to wear nothing but turtlenecks this coming winter, it’s entirely possible I’ll be sick of them by 2017.

On the other hand, there’s always the danger of being drawn on with permanent marker by the small person who lives with me.

Still a work in progress over here, folks.  :)

What’s your take on stocking up?  Do you find you go through garments so quickly you need to replace them?  Or does it clutter up your closet to have extras?  Scroll down to comment!